The resident musicians at the Hotel Nacional de Cuba had a job to do, and the howling winds and lightning strikes were not going to stop them. We sipped our beers by the pool as they sang a pitch perfect rendition of Chan Chan, the rain trickling down the rim of their hats.

What a place. The hotel has so much personality and history oozing from its walls; it's easy to conjure scenes of Hemingway chatting with Churchill by the bar, as Frank Sinatra croons away in the dining hall. That's what the decor would have you believe, at any rate.

Our trip to Cuba was two years ago, and it was in this hotel in among the thunder and the determined musicians, that we found ourselves asking: what if we could come up with an interactive game or book that brings together our love for travel, puzzles, and mysteries?

The result, which we've called Sarawak, is a project that bridges interactive fiction, narrative games and conventional literature.

The first part is set in Oxford, a city that has captivated our imaginations and where we are currently based. The grand buildings and winding lanes set the scene nicely for the mysterious death that kicks the story off. There will be plenty of puzzles in ancient libraries, secret rooms, locked doors and a cast of whimsical characters.

The game will then move all the way to Borneo, another corner of the planet that we find inspiring. Indiana Jones-esque adventure will feature, but the idea is also to show a glimpse of modern day Sarawak, providing a taste of the beauty but also the realities of life in Borneo.

Where are we at?

We've finished and optimised the engine, finalised the story, and honed the visual style. The players navigate conversational choices that help or hinder their progess, and solve puzzles to unravel the secrets that are left behind when a professor is found dead under suspicious circumstances. The following screenshot is an example of the work in progress where Mia, the protagonist, encounters a nosy porter whilst sneaking into a university. 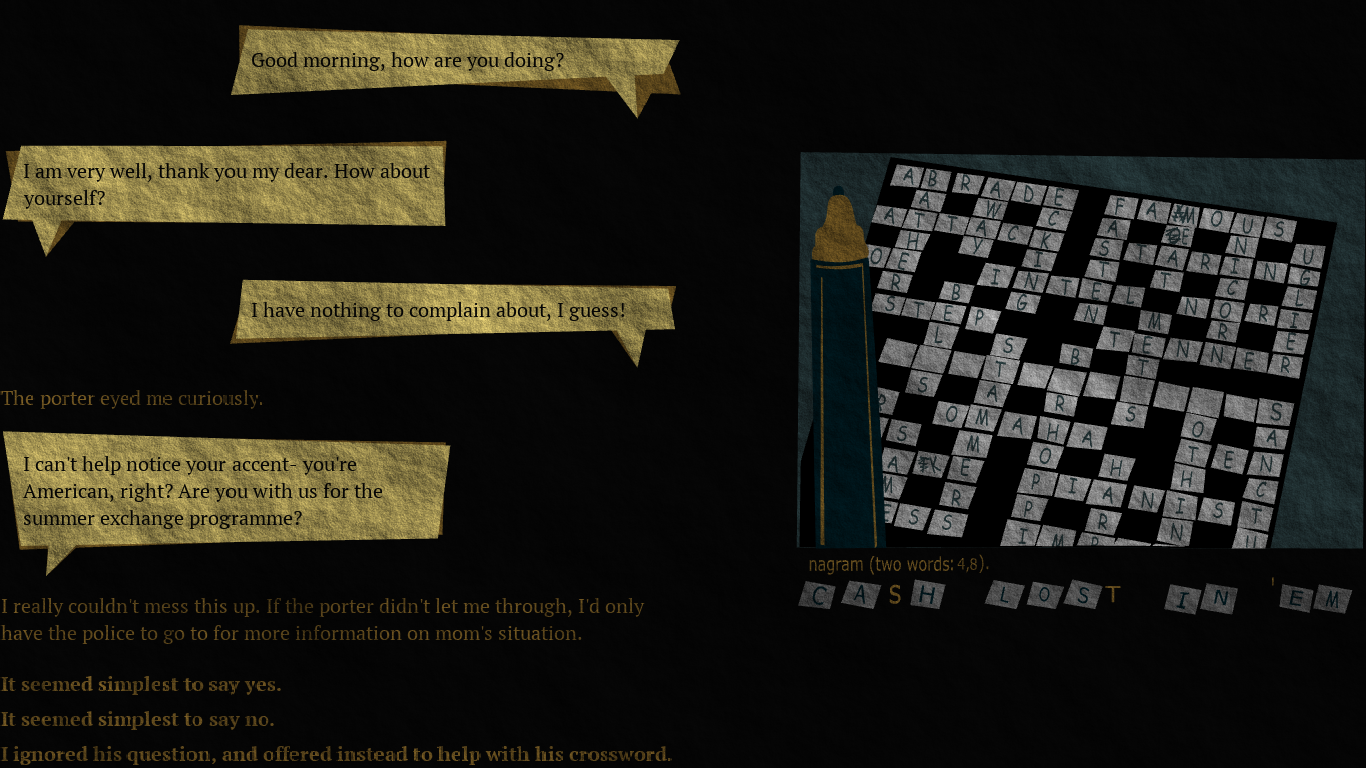 Loosely based around the story of Samson and Delilah, Sarawak has far reaching themes including betrayal, regret, corruption, environmentalism and what it truly takes to have integrity.

Of course, there were several stylistic and technical detours until we got to the current stage of development. It's been a lot of fun though, and along the way we learned, and are still learning, so much - and we hope to use this space to share some of that with you.